About Art Beauchamp, Founder
» About Us
Art Beauchamp
1937:
After attending Arkansas State College on an athletic scholarship, Art Beauchamp came to Flint Michigan to pursue a boxing career. He did well as a Golden Gloves amateur but was prevented from turning pro due to medical reasons.


1951:
Bought the oldest sporting goods store in Flint (est. 1902). He was a jobber of fine sporting goods and one of the largest wholesalers in Michigan during the 1950's. His retail outlet was at 1100 N. Saginaw St. It was at this location that his call was developed and distributed until he moved in 1976 to 3618 Fenton Rd., Flint Mi.


1954:
Began acquiring land in Arkansas for a duck hunting camp he would operate until his death in 1981.


1955:
Made a film for Winchester Arms on duck hunting, duck calling and waterfowl conservation.


1956:
Distributed his line of game calls through Sears and Montgomery Ward.


1959:
He purchased four hardware stores, and created a sporting goods department in each of them. 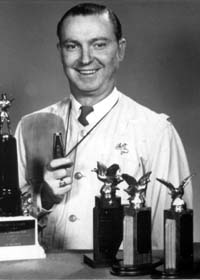 1957-81:
Actively spoke for conservation of wildlife habitat. Taught duck calling classes through the state of Michigan and spoke to Ducks Unlimited dinners in Michigan, Ohio, Indiana and Canada. It is safe to say that during these years, 75% of all people in Michigan contests were either taught to call by Art, using his call, or both.


1981-Present:
Art's son-in-law Rick Kagerer, carries on the duck call business. Under his management, the hunting line of calls continues to expand and prosper. As in the past, quality, combined with reasonable price, makes the value unsurpassed. In further developing himself as an artist, Rick has created a line of collector/custom calls that have won several national awards. Some of these calls can be found among the pages of books about the great call makers of today.