About Rick Kagerer, Owner
» About Us 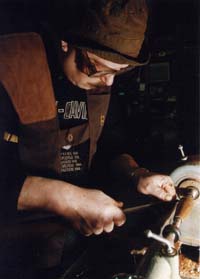 Rick Kagerer
1981:
Upon Art Beauchamp's death due to heart failure, Rick takes on the task of continuing the Art Beauchamp Game Call Company. Rick is a competition caller and has the desire and the encouragement to learn the business. His own history includes a rich blend of musical, artistic and tooling knowledge.


1982:
Rick designs a gold on clear label to distinguish his calls from Art's model.


1981 -86:
Continues guided duck hunts on the family property in Arkansas.

1984-90:
Develops a very successful fund raising program with Michigan Ducks Unlimited leaders using Art Beauchamp Duck and Goose calls. Individual goose or duck calls on a lanyard with a band were used in a raffle. Specially designed "sets" were used for the silent auction. All "sets" were dated so collectability is good.


1986:
Meets call makers Howard Harlan of Tennessee and Bob Gerat of Michigan at the Point Mouillee waterfowl festival in Michigan. Their interest in Rick's highly decorated calls help fuel ideas for a national call makers and collectors club, and a fancy call contest.


1986:
Introduces the Pro Magnum duck call. A loud harder blowing call designed for open water and field hunters in Michigan. This call is his first step in the competitive call direction, which has grown louder over the years.


1987:
Rick is one of 32 founding members of the Callmakers and Collectors Association of America.


1990-2001:
Elected Treasurer of the Callmakers and Collectors Association of America.


1994:
Improvements come to the goose flute, they are easier to blow and have a cylindrical shape. They will remain gray in color for two more years.


1996:
The request for a double reed call over the years brings out " Double Trouble". These easy to use calls were made available in walnut or Delrin..


1999:
A whole new design concept comes to market with the "Super Pro" duck call. With an easy to blow double register at its heart, this call steps into the ranks of the top performers of the day. Contest callers are now using it.


2001:
Although the short reed goose call had been on the market for sometime Rick's work on this call had to take a different approach. Going by sound he used a conventional reed and cork method for his insert, bypassing the sandwich method used by other makers. Rick has often said, "I learned from my father-in-law years ago to put the reed and cork to the back, the call maker should decide where it goes. The caller should be hunting."